Remote PC Repair is safe, secure and easy to install and use. 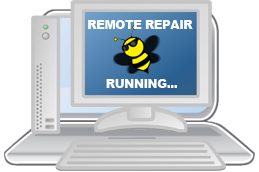 Our remote software works in encrypted mode where all data, screen images, mouse movements and keyboard signals are encrypted using 256-Bit AES strong encryption with randomly generated keys for each connection to remote computer. For user authentication our remote software can use either Windows security (your username and password that you use to get to your desktop)

Text Chat, Voice Chat and Send Message modes, which are new for Radmin version 3, all were developed to help you communicate with a person who operates a remote computer that you are connecting to.

The software is very user-friendly. Most of our users agree that the major advantage is its simplicity. All report that the interface is intuitive and the program is very easy to use. Unlike bloatware, the software has no useless 'value added' features that makes it difficult to work with, complex to learn, or that crushes its performance.

Secure "Drag and Drop" file Transfer with "Delta Copy" feature
We can securely drag and drop any files via its Explorer-like interface to or from a remote computer in encrypted mode. The software has a feature it uses when copying files that allows updating of only that part of a file which is different on both machines. This feature is called "Delta Copy" since only the difference between files ('delta') is copied. It lets you continue copying after a network fault from the place where the fault occurred rather than from the beginning. This feature is used automatically when any file is being copied to or from the remote machine.

Joomla SEF URLs by Artio
Back to Top